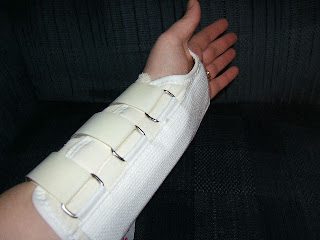 Not quite what you were expecting from the title of the post, huh?
Yep, this is what I get to wear to bed for the foreseeable future thanks to years of intensive piano practice and too much typing. I apparently do indeed have some minor carpal tunnel syndrome, according to my new doctor. I've been having pains in my hand, arm, elbow and wrist for some time now. I've also been waking up at night for a couple years now with my hand and fingers being tingly and numb from falling asleep. When I was pregnant, it was really bad, which apparently is fairly normal. I have some classic symptoms and seem to have caught it fairly early. The doctor thinks that using the splint at night will help stave off any surgery, which sounds just fine to me. I just hope he's right.
Anyhow, I've suspected it since my sophomore year in college, when I spent the better part of the year working on what still remains one of the most challenging pieces of music I've ever had to play. I was asked to play for the senior recital of a clarinetist. This is a big deal to a music major and I was honored and in way over my head with this particular piece of music. I can still vividly remember the hours upon hours a day of practice that I did, punishing both hands, wrists and arms, but particularly the left one. Guess which wrist is afflicted now? Yep...it doesn't take a rocket scientist to guess the left one. I started having pain while doing things like turning doorknobs and of course, playing the piano and typing, but being a music major myself, far from home and my normal doctor, being somewhat invincible and too busy to find time, I just suffered through the pain, knowing that eventually I would finish this job and be able to take a break for the summer.
I did finish the job. I played my little heart and hands out for a solid 30-minute long Sonata for Clarinet and Piano. It was good. I'm so very proud of the work I did on that song. It's one of those rare moments as a musician, when I know that I could not have done any better and that my best was pretty darn good. I have a recording to prove it...but because it is on cassette tape, I can't prove it here.
Then again, the above picture proves that there was a time when I was really good at playing the piano, and I have the injury to prove it!
By the way, my darling husband has affectionately termed my new splint, "The Club". I figure it could come in handy, as he has a habit of stealing the covers and kicking me in his sleep. Yes...this might be a very handy little tool....
Posted by Christina at 3:40 PM

Did I go to that recital?? Is it bad if you worked so hard and I don't remember it? (Probably an age thing like you and I were discussing on the phone.) Anyway, I think the new apparel really adds a lot - I'm a big jealous.

I don't know if you would have gone to that recital. It was for Natalie Holston. Chances are good that no one else, except for Natalie and me, would ever remember that performance, but I can promise that I will never forget it.

Don't be jealous...maybe you can borrow it sometime!

This is really bugging me that I can't remember. Was Natalie married? No...I'm thinking of um...um...oh shoot, what was her name. Christin Black? Is that a person? Did you play for her? Or was that Jenny? WHY DID I LIVE WITH SO MANY MUSIC PEOPLE?? I remember that I tried really hard to go to all the recitals - but I sure do not remember a clarinet one.

Nope, Natalie wasn't married. She was from Delaware too, if that helps. She had dark hair...

You probably didn't go...I wouldn't have if I hadn't had to play!

I can't really think of any other distinguishing characteristics right now. And yes, I think Kristin Black might have been a person we knew, but not one I played for.

I can see the age-related memory challenges are starting earlier and earlier...

Not to change the subject, but I've just started waking up at night with a terrible pain in my wrist, forearm and my fingers are numb. It would hurt so bad and wake me out of a sound sleep. I have to stand up with my right arm hanging at my side until the blood goes back to my fingers and the pain subsides. You Too?

I went to the doctor cause I thought it was a pinched nerve in my neck. Hmmm, so you're saying it's carpal tunnel. Note to self, go to new doctor....

First, it must be stated that I'm not a doctor, I just play one on my blog. (There, that will appease my lawyerly husband!)

Second, I did some searching on the internet for a list of symptoms. The very first site that popped up had this to say, "The first symptom people usually notice is that their fingers tingle and become numb while they are sleeping and they wake up frequently during the night. Most people do not even realize that they have carpal tunnel syndrome and attribute waking up to sleeping on their hands in an awkward position. Early detection and treatment is important to checking the progression of the symptoms."

As I read through the list, I have more of those symptoms than I like to admit, but at least now, maybe I have a rational explanation for it. But like you, my left hand in particular would fall asleep all the time and I would shake it and change positions, only to have it fall asleep almost immediately again. It got so bad that about a week ago, I woke up and my hand was asleep and my three middle fingers stayed tingly for about 45 after getting out of bed. That was a little unnerving.

The good news is that the splint the Dr. gave me seems to be working. I haven't noticed my hand falling asleep for the last two nights. Now I just have to find something to go over the velcro on the splint so it doesn't catch on everything.

Good luck figuring out what is going on...but in my non-professional opinion, it sounds like you have a good case for getting a second opinion and perhaps asking a pointed question about whether it could be carpal tunnel syndrome.

Thank you (pseudo doctor) Christina. I was given some Celebrex and told to come back in two weeks. If that didn't help, which it hasn't, we have to do a nerve test to see if it's a nerve. I do have lower back problems and had nerve test on my back, right leg and foot. Not fun, little needles pricking you and one BIG LONG needle in my spine (then asked to lift my leg, right!)So I don't want to go though it again on my arm and neck.

One more question, if I may, do you have pain in your wrist and the muscle in your forearm and if so, does that pain wake you as well?

All I can say about the nerve tests you've had are OUCH! That doesn't sound like fun.

I have what I would describe as various aches and pains in my wrist and the underside of my forearm all the way up to my elbow and sometimes my neck and shoulder, though that could very well be stress and tension too.

Usually, the pain that bothers me most is the underside of my forearm. I get shooting pains from my wrist (and sometimes middle finger) up to almost my elbow. It also bothers me when I drive. Some of my problems also stem from carrying Emily with my left arm. (I'm right handed so I like to have that hand free.)

I do know that the manual tests that my dr. had me do yesterday were non-invasive and seem to follow exactly all the recommended tests I've found in my research since then. He tapped a spot on my wrist repeatedly, then had me hold my wrists together a certain way to see how that felt, then put pressure on a spot in my palm, above the median nerve. There are other nerve tests that I've read about...maybe try to look up tests for carpal tunnel...I bet there's tons of info.

I'll happily answer any more questions and help you research, as I'm doing some of my own anyhow. I have to run some errands now...I'll be back later.

Thanks Christina, sounds like my pain too. I'll do some research before I do anything, and get a second opinion.