Well it's been a while!  Life has been more than a little hectic since I last posted, mainly due to the fact that I have now been gainfully employed for almost 5 months now.  That has been a steep learning curve and a big adjustment, as I try to figure out an unpredictable schedule and work that around the ever-changing needs of a 1st and 6th grader.

And the 6th grader....oh my!  Middle school has been an adjustment for all of us.  Emily played volleyball this fall and that was, well, an adventure.  I'm pretty sure the experience spoiled volleyball for her for good.  She is still trying to find her "thing", which is harder for some people than others.  I tend to think she will excel in drama/theater, and she really seems to enjoy that, but only time will tell.  In the meantime, I think we're all treating this year as a transition year that we just have to survive.  Hopefully next year will be better.

Ethan, on the other hand, loves school (most days!)  He is reading at a late second grade level already and doing really well.  He's the kind of kid that gets along with everyone and when he walks into a room, the response he gets can best be compared to that of Norm from Cheers.  Everybody knows and enjoys Ethan.  He has a quick wit and is downright funny...which occasionally gets him in trouble here at home (even if it is still funny!) I'm just waiting for the day when it finally slips out at school at the wrong time, which it inevitably will once he gets past the last little bit of shyness that he has.  His super-power is comedy, but as we all know, with great power, comes great responsibility to use it wisely.

Andrew is closing in on 5 years of work at the bank.  He has been promoted several times and is now a senior vice president and senior trust counsel (or something along those lines!) and is being his usual over-achieving amazing self.  He works so hard at everything he does and I am so proud of him.  He is also teaching Sunday school classes at least half the year, which has created quite a bit of extra work for him, but he does a great job.

As for me...I am plugging away at work.  I sit at my desk in front of the window and code outpatient lab and radiology reports and a few other things here and there.  The job sounds so simple in theory, but it is anything but.  There is a TON to learn and all sorts of guidelines and exceptions and special instructions...and those can change from job to job or the type of coding that I do.  I like the flexibility of working from home in my comfy clothes, but it's also hard to be brand-spanking new and not have a co-worker readily available to answer questions.  However, I spend my days in my very comfy space-agey looking ergonomic desk chair with my radio on, a cat (or two or three) on the corner of my desk that they now "own", able to look out my window at the changing seasons, the birds at the birdfeeder and the squirrels and chipmunks that have become my daily visitors.  All in all, it beats a cubicle deep in a hospital basement any day!

So that's our update for now.  Obviously, there's much more that happens here and maybe someday I'll come back and share some of those stories too, but for now, this will have to do!
Posted by Christina at 9:41 AM 2 comments:

Well, I guess it's time to 'fess up....I'm no longer "just" a stay at home mom.  I'm officially employed as a remote independent contractor for a coding company, which hopefully will lead to full-time salaried employment with the same company if I work out.  Allow me to explain....

A couple of weeks ago, I found out about a coding company and took the assessments that were part of the application process.  Within a day or two of submitting the test (for inpatient and ER coding), I got a request for an interview, which I happily accepted.  The phone interview was short and very down-to-earth, with none of the crazy interview questions that I had prepped for ("what is your definition of success?" or "tell me a time when you failed at something").  In short, they told me that they normally don't accept someone with no experience, but that my test scores (while falling short of their normal pass rate of 90%) were much better than many coders with lots of experience who apply, so they were interested in testing me out as an independent contractor who would be trained to eventually code ER reports.  This was last Thursday, I believe.

I started work Monday.  Right now, I'm training and starting with "easy" stuff, but the end goal is to get me coding ER reports, which can be a lot more challenging.  It's pretty overwhelming, to say the least, but I fully realize that I have been amazingly blessed.  It's very rare for a brand new certified coder to find a remote position, and to find one that is willing to do some training because they saw potential is even more rare.  The schedule is flexible and I will still be able to take the kids to school and back and kind of set my own hours (eventually).  I can even work in my pj's if I so choose, which isn't a bad deal at all (though I'm usually fully dressed!).

So life has taken a sudden shift, but not a bad one at all....instead, a huge answer to prayer.  That being said, I'll take any and all prayers going forward, because after not having a full-time "real" job in many, many years....this will be an adjustment and I want so much to do well for this company that took a chance on me, but my confidence is a little shaky!
Posted by Christina at 10:34 AM 4 comments:

A while back, I happened to catch a little news story about a health/fitness "camp" that was put on by Riley Hospital in coordination with Andrew Luck.  It was free, but there were a limited number of spaces.  I decided that Ethan needed to be a part of that, but I assumed we wouldn't happen to make it in.

Well, he did and it happened yesterday.

We registered at a local football field at 1:00 on a blazing hot 90+ degree day.  Here's Ethan with "cardboard Andrew" before things got started. 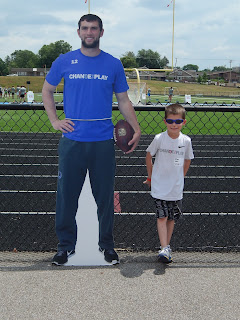 The kids were split into about eight groups and they rotated around different stations, learning some fun exercises.

Below is Ethan, the cool dude in his shades, waiting for the main event . 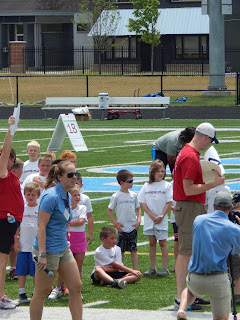 Still waiting....and wondering what the big fuss was about.... 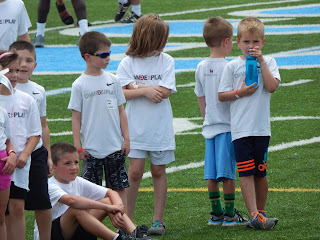 And then the Man appeared....Andrew Luck, quarterback of the Indianapolis Colts, on the same field as Ethan! 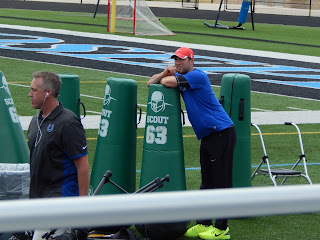 Andrew (the husband, not the QB) and I sat in the first row of the stands and Andrew (the QB, not the husband) stood right in front of us, waving shyly at the crowd of (probably more excited than the kids, parents). 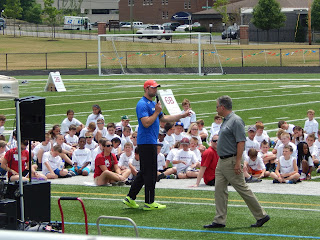 Andrew gave a little five minute speech and took some questions from the crowd (of kids) including what was his favorite sport and whether he was mad about Deflate-gate!! 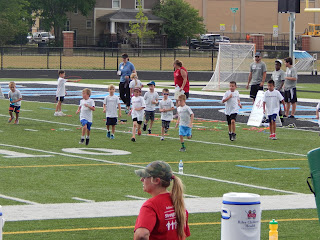 Then it was off to the stations!

Ethan did pretty well with running around the cones! 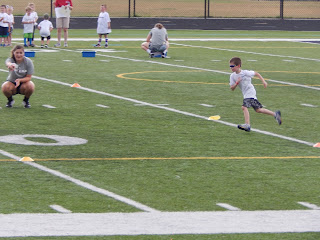 And then he got to get up close and personal with the Luck-man himself!  (He's on the far right side below.) 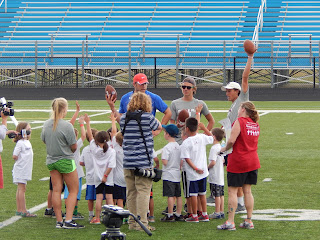 Now I fully realize that you cannot see Ethan in the picture below at all, but you're going to have to trust me....He had the opportunity to catch a pass thrown by Andrew Luck.  If you look toward the bottom middle, you can see the ball, mid-flight and two little arms reaching out to try to catch it....emphasis on try!  But still, he played catch with an NFL quarterback! 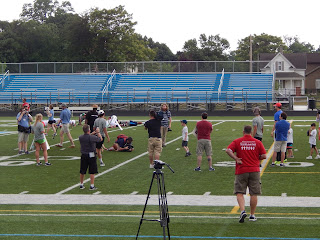 And finally, here is a picture I found on the official "Change the Play" Facebook page....I guess they liked his jump-rope style! 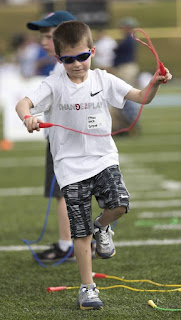 As a side-note, Ethan also made the local news, showing him doing push-ups in a small group with Luck, but the video would not load for me, so I'll try again another time.

Thanks to Andrew Luck and Riley Children's Hospital for providing this fun opportunity of a lifetime!
Posted by Christina at 7:32 PM 2 comments: 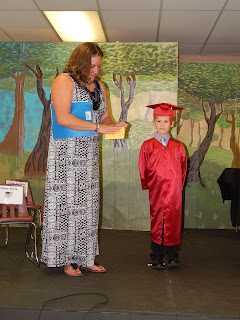 We've had a few graduations around here in the last couple of weeks.  I graduated from my medical coding program in April and then last week, Ethan graduated from Kindergarten and Emily graduated from elementary school.

The picture above is of Ethan with his teacher, Miss Liechty.  He had a great Kindergarten year and we are so blessed that she was his teacher. 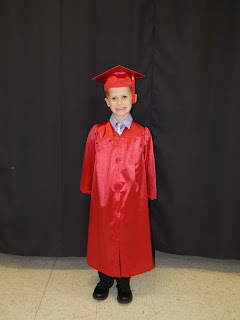 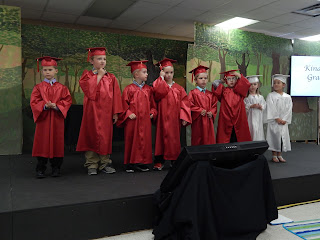 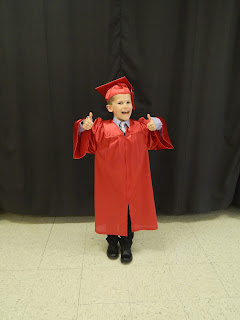 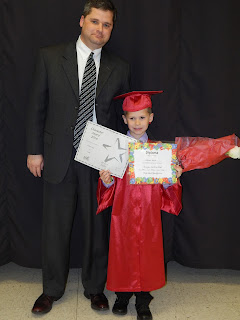 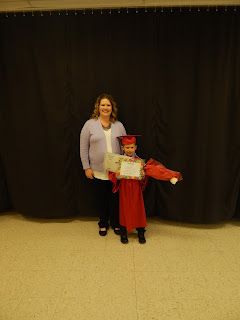 See, I really am there...Ethan and Mom 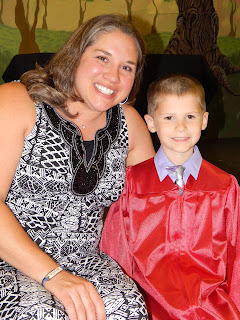 Ethan and his teacher 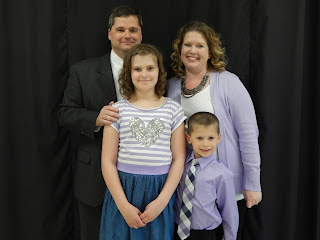 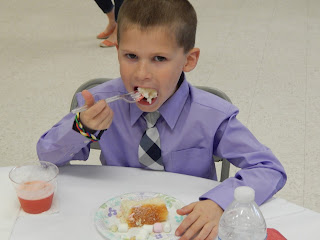 And the best part of graduation.....the cake! 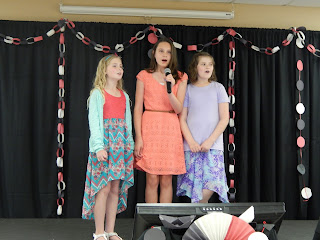 Here she is with two of her friends, Lily and Emily, singing a song. 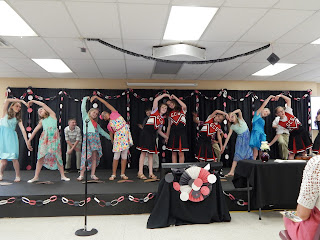 Her class was large for her school...I got most of them in the picture! 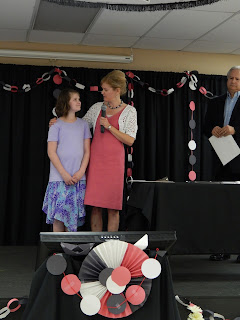 Emily receiving her certificate from her teacher, Mrs. Kane.
Posted by Christina at 11:34 AM 3 comments:

Guess who has new letters following her name?   Yep....me!

I took my national medical coding certification exam on Saturday.  It was the CPC exam (certified professional coder) and took me 5 hours, 20 minutes to complete.  Yesterday evening, after obsessively checking my exam status, I found out that I passed with a score of 91%, which I am told puts me at "Magna Cum Laude" status!  From what I understand, the CPC credential is the gold standard for outpatient medical coding, so I'm good to start applying for positions.  However, I can also code inpatient and vastly prefer that, so I need another set of credentials to help open doors for hospital inpatient jobs....so, after a quick celebratory dinner this evening, it's off to start studying for that 4 hour exam, and hopefully another set of new letters behind my name.

So far, it's Christina, B.S., CPC-A...and hopefully soon to include CCS!!
Posted by Christina at 4:32 PM No comments: